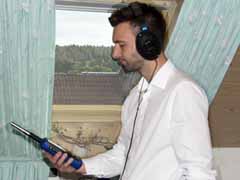 Customers are calling building-biologist Oliver Zenkel whenever they hear very quiet sounds. The hum is imperceptible with normal hearing. Particularly disturbing is the monotonous and recurring frequency. The person concerned enters a feeling of helplessness. Mr. Zenkel has adjusted to the soft tones and plugged a headset to the sound level meter as technical reinforcement. How the search for the hum can succeed, describe the following examples.


Holes in the heat exchanger caused a whistling sound

Family N. from North Bavaria suffered for two years under a low-frequency noise in her bedroom. In suspected was a gas heater on the neighboring property. A sound level measuring underscored the presumption. Family N. endeavored henceforth to an amicable solution and ordered at his own expense a company specializing in the investigation of the heating system. Ultimately, the cause was quickly found, although not as expected: a perforated grate of stainless steel heat exchanger had caused the noise. Improper air supply the plant got too little fresh air and sucked through the grate holes permanently air on. The triggered whistle was transmitted to the home of family N. The heating engineers replaced the heat exchanger, thus ending the ordeal of family N.

The computer fan on the fourth floor

Mrs. P. lives in the second floor of an apartment building for rent. A very quiet humming robbed her awake at night. The noise cause might lie within or outside the home, because the A9 motorway is just a few kilometers from the residence. However, a sound level meter with subsequent noise analysis excludes the traffic and directs the suspicion instead of an apartment on the fourth floor. The determined frequency corresponds to the sound of a computer fan. The neighbors agreed on an amicable and cost-effective solution: a sound absorbing mat was placed under the computer case and now prevents the transmission of structure-borne sound in the lower floors.

A cogeneration plant in hundred meters

Part-1: A resident of Berlin heard the hum of the cogeneration plant (CHP) clearly in his apartment. The technician Mr. Zenker recommended a long-term measurement of the sound level over at least 24 hours. In particular, the night measurement provides a better understanding of the source of sound, because the noise is low at night. The evaluation of thirds resulted in a significant excess of the threshold of hearing at 50 Hertz. The affected residents handed immission control authority the measurement protocol. The operator must now take sound-damping measures.
Part-2: Far more difficult, for the residents, the negotiations with the operator in another case: after negotiations were hardened, the resident personal injury led to the field. In conditional intent deliberate injury of another is accepted. If injury is present with intent, the public prosecutor has to determine after a criminal complaint. Finally, the threat of a lawsuit was enough to move the operator to noise protection measures.