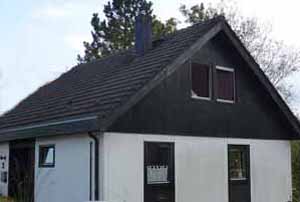 bad smell in a prefabricated house

The desire for an affordable property led Henniger family living in Heidelberg (Germany) to an object from the seventies. The floor plan corresponds to the space requirement of the four-headed family and the large garden with the fruit trees invites to play with the children. Jörg Henniger is not blue-eyed. He has read about pollutant problems in this house generation. In this case, however, everything seems different, because a bad smell is not in the air.

Henniger can not guess that the real estate salesmen are learning about it. It is just summer and the house was thoroughly aired before the sightseeing. This form of the exchange relationship between buyer and seller occurs a dozen times a month. For this reason, the causes of possible odors should be clarified. Three chemical substances are responsible for certain odor types: formaldehyde provides a pungent acid odor, chloranisols produce a moldy musty smell. If chloronaphthalenes are found in the building structure, it smells musty-sweet.

The relatively high proportion of formaldehyde in the room air is due to the construction of these types of houses. Instead of massive building materials such as brick or concrete, the manufacturers used particle boards in the outer wall as well as in the inner walls. Chipboard are also installed in the floor and ceilings. The components of these plates are bonded with formaldehyde-containing adhesives. In the meantime, the proportion of formaldehyde in building materials is heavily regulated. The legislature has not been able to get through to a ban on the chemical. In one cubic meter of room air, 100 micrograms of formaldehyde are currently permitted in the European Union. For the prevention or health problems the room air should be analyzed with regard to formaldehyde loading.

Wood preservatives are responsible for the formation of chloranisole

The smell of chloranisis is often found in buildings where V100G particle boards have been installed. Chipboards with this designation can withstand a maximum moisture content of 15-18%. The addition “G” indicates the use of wood preservatives in the slab material, which allows installation at a moisture content of more than 18%. The wood preservatives used in the past were predominantly chloro-organic substances such as tetra- and pentachlorophenol (PCP), lindane (g-hexachlorocyclohexane), chloronaphthalenes and dichlofluanide. PCP has anti-inflammatory and lindane served as an insect repellent. The degradation of pentachlorophenol occurs through the bacterial species Pseudomonas. Trichoderma strains will also convert PCP to pentachloranisole. There is currently little known about a direct health hazard due to the absorption of chloranisols over the room air. In this case, the focus is on the investigation of wood preservatives.

Chloronaphthalene was also a component of wood preservatives

This chemical was used in the course of the production of moisture resistant chipboard (V100 G) for the protection against mold fungus. Chlornaphthtalin was part of the wood preservative Basileum SP 70. Emissions depend on the room air temperature and the moisture content of the building materials. The smell is already perceptible at room air contents below 10 μg / m3. The gas also results in secondary contamination. It is deposited on surfaces or clothing pieces. Little is known about the toxicological effect. Mostly inhabitants are unaware of the unpleasant smell. Only when guests of the house openly talk about the problem is the mental impetus.