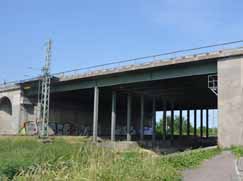 the highway bridge is the cause of the humming

For months Roland Wernstein (Germany) examines an annoying buzzing sound in his neighborhood: the heating system, bass from the neighborhood, truck engines, vibrations caused by rail or air traffic were suspected, but were rejected. The end of March 2016 he took time for the facts check: the humming was heard only at night and when the wind from the southwest, recalled a distant diesel engine running and had short, miscellaneous long interruptions.


The highway bridge is suspected

Wernstein can not only hear the cars on the highway, which passes close to the site, but also see from a distance of five hundred meters. He recorded that the hum of the highway delayed, but synchronously arrives to the visible vehicles on site. He estimated the running speed of automobiles and the speed of sound and detect the sound source at a distance of one to two kilometers. In this direction is 1.5 kilometers from a highway bridge. The highway bridge thus comes under suspicion. Wernstein recognize after a site visit the links: a vehicle is running on the bridge, causes a short drive-on loud noise and vibration until the vehicle leaves the bridge. Just off the bridge, the sound heard not so extremely low like in the house. However, the type of sound was exactly the same.

The hum sufferers find an explanation: the motorway bridge is supported on both sides of rubber and metal buffers. In the center a bearing pillars supporting the bridge. Thus it depends identical as the membrane of a loudspeaker in the air. The structure thus acts like a bass speaker. Inspired by the vehicles, the membrane produces extremely low tones that spread widely over several kilometers. The sound waves are carried by the wind to the place of residence. Since the bridge is approximately in direction south-west to the home of family Wernstein, the buzzing sound is audible at night with wind from this direction.

The humming noise is bearable, if the causes are known

Roland Wernstein is relieved that the causes of the annoying noise are now processed. The search for the hum is thus finished for him. His call to the civil engineers are: correctly assess the vibration behavior of highway bridges and to avoid noise emissions.