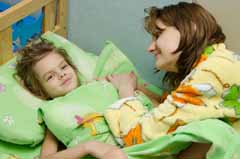 Now the girl is sleeping well

Sometimes solutions can be quite simple. The parents turn the wireless router off at night and the two year-old daughter sleeping since then through again. The background: Susanna Rubin was with the nerves at the end. Her child woke up in the master bedroom at night nine to ten times screaming. If the family stayed away from home, there was no trouble sleeping. The building biologist initially investigated the area of the bed. There were a few little things to correct. For example, the low-frequency alternating electric fields could be eliminated almost entirely by turning off a circuit. For the electrostatic charging of the bed surface, there was also a solution. The main problem for the sleep was not to be found right in the bedroom.

On routine demands of the building biologist to WiFi and DECT cordless phones, the two devices were found in the living room of the Rubin family. In the DECT phone the ECO mode was activated as a precaution. Therefore, it emitted no electromagnetic waves, as long as the handset was in the cradle. With the high-frequency measuring HF59B of Gigahertz Solutions proof was done quickly. The wireless router had no ECO mode. The rhythmic tacking the HF59B brought the audible confirmation for Susanna Rubin. The high-frequency fields of the router penetrated through the wall into the adjacent bedroom.

From January WiFi was turned off at night

On the recommendation of the building biologist the router was at night decommissioned end of January 2016. The two year old is sleeping since this through almost completely. When the family one evening had forgotten to turn off the wireless router, the child had again at night a disturbed sleep. Far away from all scientific studies, the mother sees confirmed the suspicion that WiFi has disturbed the sleep of her child.

The medical physicist Dr. Lebrecht von Klitzing researches on the impact of wireless on the body

Lebrecht von Klitzing (Germany) has specialized, with different methods to measure the impact of mobile phone fields directly on the human body. In the first method, it measures the ECG heart rate variability (HRV). With the laser Doppler method he can prove by capillary regard. The code “microcirculation” shows the extent to which basic biological regulation is active. Finally, the stress sensor is used: with an electrode matrix measures von Klitzing the electric potential distribution on the skin surface of the forearm.
Von Klitzing summarizes in an article in the journal Environmental Medicine Society from 1/2014 his findings on the impact of wireless on the people: Several volunteers have shown when applying the above-mentioned measuring method autonomic abnormalities. The disturbed regulation dynamics permits a statement about the extent of the organism responds to exposure to electromagnetic fields. The measured field strength of the wireless signal was 20 microwatts per square meter is well below the legal limit. Particularly startling for the researcher was the finding that DECT radiation less on the vegetative nervous system acted as the exposure with WiFi.

Router should have a button to turn off

Routers serve as an interface between the computer and the high-frequency signal of the telephone or Internet provider. By default, at least two cable connections and a radio transmitter are set. The user should make sure that the wireless LAN radio is turned off after the system. The easiest way to do this by pressing a button on the casing. If the router have no off button, then the radio signal via the software must be disabled on the PC. As was to be read on an Internet forum, the company Unitymedia (Germany) delivers the router only from having WiFi enabled.