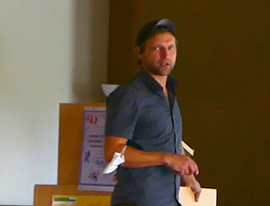 Architect Florian Hoppe knows his way around both building materials. He developed a relationship with clay at a very early age in his father’s company. He learned masonry and plastering by working on several construction sites in Thuringia/Germany. Through a cooperation of different companies it was even possible to use local clay. In the course of his architectural studies, Hoppe became enthusiastic about straw bale construction. One idea in particular from the settler days in America did not let him go: he wanted to realize the load-bearing straw bale without wooden stud construction in Germany as well. After careful preparation and with the support of his family, he was able to move into his spacious straw house ten years ago.


The development of straw building began in America

The idea of straw bale construction originated in Nebraska in the USA. There, the settlers in the 1900s did not have enough lumber, but they did have large grain fields. The first load-bearing houses were rather small. The first two-story house was built in 1936. In the 1970s, people in America remembered the natural building material again. In Europe, the first straw houses appeared in the nineties. The pioneers joined forces in the Straw Bale Building Association (FASBA) and achieved building authority approval for non-load-bearing straw construction. For load-bearing construction, on the other hand, individual approval from the building authorities is still required. In Germany, around four hundred straw houses have been documented, but only three of them in load-bearing construction.

In 2014, the Straw Building Association published the Straw Building Guideline for the first time and brought out an adapted version in 2019. This guideline supplements the recognized rules of construction technology. Straw bales are produced directly in the field using conventional straw balers. Dimensions up to a cross-section of 40 cm by 50 cm are considered small bales. Much larger cross sections are required for load-bearing straw construction. The greatest challenge in the construction process is that the straw must remain dry at all costs from harvesting to installation. Straw from wheat and rye is best suited. Fire protection is ensured with clay or lime plaster as little as eight millimeters thick. For optimum thermal insulation, the straw should be placed perpendicular to the direction of heat flow. Therefore, the installation is done standing on end or lying on end. Of course, straw construction must also comply with the recognized rules for thermal insulation. Therefore, a blower door test with leakage detection is carried out as proof of the quality of workmanship.

In the FASBA guidelines, load-bearing construction occupies only a small space. One refers to numerous uncertainties and a necessary individual approval for building permits. Florian Hoppe and his team did not shy away from this risk and built a house without a timber frame. The load is primarily carried by ring beams made of wood on each floor. Planks and rammed earth on glass ballast serve as the foundation. Large bales measuring 240 x 120 x 70 were used for the exterior walls. The interior walls are made of wooden studs, adobe bricks or sand-lime bricks, and the false ceilings are made of wooden beams with straw insulation. Hoppe used lime for the exterior plaster and clay for the interior plaster. The load-bearing capacity of straw is now also of interest to scientists at Bauhaus University, and Florian Hoppe is playing a key role in the project. He is evaluating shear tests on a 7.20-meter x 2.70-meter straw bale wall and measuring using both conventional methods such as displacement transducers or tachymeters and optical measuring methods. Hoppe wants to help provide reliable data on vertical and horizontal load transfer in walls made of straw bales. The engineering models with standardized parameters should provide valuable assistance to planners in the future and give straw as a building material more tailwind.

Walls made of clay can also carry loads. Until now, this technique only worked with the labor-intensive rammed earth construction method. Since 2019, the Bauhaus University in Weimar has been experimenting with prefabricated load-bearing solid earth walls in clay panel construction, abbreviated as LTBw. Prefabrication was previously known primarily in concrete construction and timber construction. The researchers show that clay walls can also be built rationally and cost-effectively. Monolithically layered prefabricated clay elements with optimal load-bearing capacity and heat transfer behavior are built. The cross-sections are smaller than in rammed earth construction, shrinkage deformations are avoided and construction and drying times are significantly reduced. The tamping of the clay is done by machine and fully automatically. Professor Jürgen Ruth is supervising the research project at Bauhaus University. He wants to combine all the positive properties of solid earth building with an economical construction method, promote load-bearing earth building through the use of the prefabricated earth building panels and make it more accessible. Specialist planners are to be provided with characteristic values for the prefabricated earthen building panels. In this way, the Bauhaus University is helping to bring natural building materials such as clay and straw out of their niche and into the field of vision of architects and engineers.