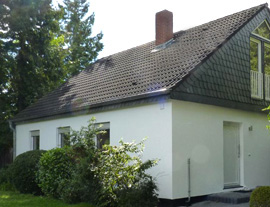 Prefabricated houses from the seventies are part of the fixed portfolio of real estate agents. Mostly, the offers are tempting for young families. The most important plus points are considered to be a prime location, a relatively large plot of land, a good room layout and, ultimately, a favorable price. Too often, homebuyers suppress the problem of pollutants in older prefabricated houses. Even fifty years after completion, certain groups of pollutants have not yet been aired out.

The unpleasant smell is not immediately noticeable

The building biologist Oliver Zenkel generally asks callers about perceived odors during the first house inspection. Surprisingly, the smell is not always immediately noticeable. It may be due to the fact that sellers or brokers air the rooms thoroughly before the inspection. All prefabricated houses also do not smell equally noticeable. The primary cause of the odor is chlorine anisoles. This chemical substance is primarily produced by the microbiological degradation of wood preservatives. This is because the construction of prefabricated houses usually consists of wooden beams and chipboard. In the seventies and eighties, these wooden surfaces were often treated with wood preservatives. Chlorine anisoles persistently remain in the building, as they additionally adhere to furniture, wall surfaces or the cladding. Often, residents no longer notice the odor nuisance due to the years-long habituation process. For this reason, homeowners not infrequently react with surprise or sensitivity when a guest asks them about the problem.

In many cases, the odor problem is joined by a health risk posed by low-volatile indoor pollutants in the air. House buyers often do not quite believe this finding, which pollutants should nevertheless be aired out after such a long time! Formaldehyde belongs to the very long-lived chemicals. The chemical got into the prefabricated houses through the installed pressboard in floors, walls and ceilings. These boards consist mainly of wood chips and a binder made of synthetic resin. The formaldehyde contained in them breaks down over the life of a building with the addition of atmospheric moisture. The formaldehyde concentration in the room run is therefore closely related to the relative humidity. It is not uncommon for concentrations above 120 micrograms per cubic meter (µg/m²) to be measured in prefabricated houses. Peak values in houses built in the late seventies even reached 300 µg/m² and more. Formaldehyde is classified according to KMR list as carcinogenic in the category 1B.

In prefabricated houses, primarily the stud frame was traded with chemical wood preservatives. Lindane and Pentachlorphenol (PCP) were most frequently used in this context. The chemicals not only enter the indoor air directly, but also accumulate in house dust. Therefore, laboratory analysis is possible via both indoor air and house dust. PCP is intended to prevent fungal infestation in the material, while lindane is used to kill insects. Both chemicals are classified as level 2 carcinogens according to the KMR list. Lindane is suspected of causing neurological damage in humans. Chronic fatigue and exhaustion syndrome is also mentioned in the literature as another clinical picture.

In the age of the Internet, there is a solution for every problem – at least from a superficial point of view. In a seemingly serious research project, the Fraunhofer Institute for Wood Research (WKI) has made some suggestions. The installation of a decentralized ventilation system is at the top of the priority list. The measure is particularly indicated if an old prefabricated house is to be renovated for energy efficiency. Otherwise, the WKI recommends taking a selective approach to renovation and determining the entry paths on the basis of an inventory. If possible, contaminated material should be replaced via the exterior wall. Weak points in the interior, such as sockets or light switches, should be sealed. To reduce chloranisole concentrations, the research project recommends applying an absorbent activated carbon wallpaper. The effect of masking paint coats on walls and ceilings has not been permanently proven. If necessary, a follow-up treatment should be carried out after ten years. If the basement has a sound structure and the property offers a high residential value, partial demolition and subsequent new construction could be an alternative to costly remediation with an uncertain outcome.
Link:
https://publikationen.dguv.de/widgets/pdf/download/article/3517