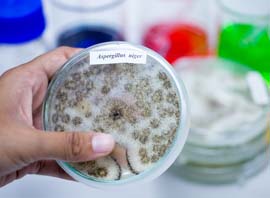 Another case from practice. An employee of an industrial company complained about health problems that he thought could be related to a mold in the operating rooms. The technical director of the company took the process seriously and commissioned the building biologist Oliver Zenkel with a room air examination. Culture media and particle collectors were sampled in two indoor and outdoor areas and then sent to a special laboratory for mycological examinations. After fourteen days, the lab report came and showed mushroom species that normally have no place in the room air. Particularly striking were some groups of the mold fungus species “aspergillus”. On the basis of this laboratory finding, the building biologist suspects an invisible mold source in the operating rooms.


The health assessment must be made by the doctor

The building biologist without medical training is not authorized to carry out a health risk assessment. He will therefore refer the client to the company doctor. A general guideline for medical diagnostics has been developed by the working group of the “Scientific Medical Societies” (AWMF) under the direction of Professor Wiesmüller. The Guideline “Mold Exposure indoors, Medical Clinical Diagnostics” (abbreviated AWMF Mold Guideline) goes deep into the medical relationships between indoor and outdoor exposure to mold and health effects on room users. Professor Wiesmüller sees it primarily as a medical task to assess the health risk of mold. On the basis of a medical history, the doctor first checks whether the complaint or clinical picture may possibly be due to a mold fungus exposure. The anamnesis is supported by skin tests and examination of the blood for antibodies. As part of the anamnesis, the evaluation of the living and working situation must not be forgotten. Regardless of the clinical picture in individual cases, the working group advises against tolerating mold infestation to the “relevant extent”. The most important measures are the clarification of the cause and appropriate remediation of the moisture damage.

In the case of a hidden infestation, the expert can not avoid a component opening. In the present case, a prefabricated plasterboard wall is located on the outer wall for visual reasons. These should now be opened to gain further insights. A hole with a diameter of six to eight centimeters is enough to bring a temperature and humidity sensor behind the wall. If the relative humidity in the cavity is significantly above the values in the center of the room, then a moisture damage can be assumed. The building biologist found in the case described above a high humidity in the cavity. Together with the manager it was agreed to completely remove the wall cladding during the non-working period. The affected area on the outer wall is only a few square meters.
However, if the examination area covers a large wall area and the measure is associated with uncertainty, then the area behind the plasterboard wall should be examined with an electronic endoscope. To do this, drill additional holes to insert the probe in several places. If the client wants to forego the component opening for the time being, then the use of a mold detection dog comes into consideration.