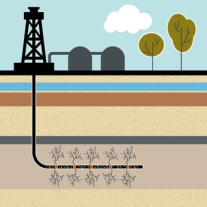 Shocked most viewers showed after the broadcast of the film “Gasland” last Tuesday at Arte TV. This is in any case clear from the comments on the eighty-Arte blog. The film from 2010 tells how high standards of environmental were repealed by lobbying in the United States. Then the way was clear for the gas companies. The hydraulic fracturing method attempts using large amounts of water, sand and chemicals extract natural gas from shale rock at great depth to pump, purify and bring into the gas grid. The chemically contaminated residual water must be disposed of. The fracking industry is in the chance of an independent international energy and job creation. “The energy belongs to us”, is the motto of the industry lobby.

In “Gasland” shows the author John Fox as residents burn with a lighter water from the tap. The brown or black broth should people be able to drink, as the authorities have certified a wholesomeness. An employee of the gas company was also offered the tap water for drinking. But this declined with thanks. People are not just sick by the water itself, but also by the exhaust gases of the area. The cocktail of chemicals used is not divulged by Operator side.

Shale gas production in Europe too

Arte TV also reported that Poland already started with the gas loss. In southeastern Poland, farmers put in two years against the oil multi-Chevron to defend. The fear of risk to drinking water to go. Some MEPs support the movement “Occupy Chevron” and try to sway the Tusk government. The documentary “Gas Fever” by Lech Kowalski is also available on Arte TV. Mayor of London Boris Johnson is alleged that he should not be afraid to break even under the British capital, the shale using hydraulic-fracturing. Will it accept the British without complaint?

The black-yellow government had already made the arrangements for the shale gas exploration in early 2013 on the way. The resistance of the opposition parties was the law in the Bundesrat fail. Before the national election in the fall of 2013 not much will happen. If the former government comes back to power, a new start for the gas mining in Germany is expected. The Citizens’ Initiative will in any case remain vigilant.

One thought on “Fracking concerns us all”