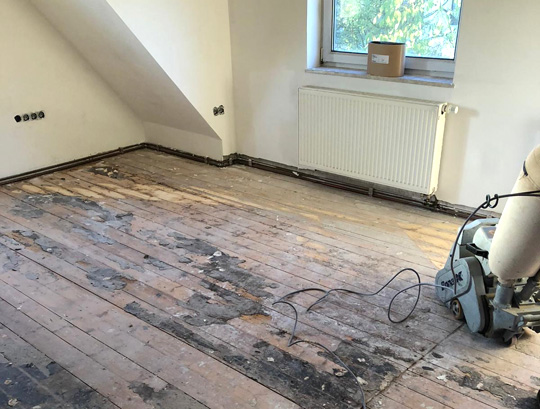 Renovating a house from the 1960s

A young family in Thuringia (Germany), full of enthusiasm, renovated a house from the 1960s. They wanted to keep the floorboards on the first floor and started sanding off the top layer. But after a short time the Stickler family was very sober. During the work it started to stink terribly. Ms. Stickler also worried about her child’s health. A building biologist should investigate the process to find the reason for the unpleasant smell. The expert sampled the room air using the TENAX method (2 liters of air at a volume flow of 100 milliliters per minute). As a precaution, he took a material sample from the flooring.

To the surprise of those involved, the indoor air sample did not provide sufficient evidence of the smell. The TENAX analysis did not confirm the suspicion of naphatalin. The subsequent material inspection ensured clarity. Striking values for cresol were found. Cresols not only emit a strong smell, but are also considered carcinogenic and are suspected of disrupting the hormonal balance of living beings. They are rated accordingly strictly. Guideline-II-value of the German interior commission is 5 micrograms per 1 cubic meter of air.

Cresols are often mentioned in connection with phenols. Both chemicals are fungicidal and bactericidal and are mainly used in disinfectants or to preserve glue or adhesives. Flooring adhesives contained cresols and phenols in products in the 1950s and 1960s, particularly in the old federal states of Germany. Particle boards bonded with phenolic resin can also cause unpleasant odors indoors. The chemicals are also feared in the area of occupational safety. When they hit the skin they are corrosive. Even the wetting of small areas of skin can lead to serious damage to health, warns the professional association.

Chemical properties of cresols and phenols

Cresols are considered to be medium to low volatility. The chemicals are able to gas out into the room air over a longer period of time. From a chemical point of view, cresols belong to the group of aromatic compounds. They are derived both from methylphenols and from hydroxydtoluenes. The boiling points of o-, m- and p-cresol are between 191 and 203 degrees Celsius. Cresols appear as a colorless or yellowish liquid or as crystals in the solid state. The chemical gives off a pungent tar-like smell. It is produced industrially at a temperature of around 250 degrees Celsius and a pressure of 300 bar by the reaction of chlorotoluene with sodium hydroxide solution.

In a school in North Rhine-Westphalia (Germany), phenol and cresol were also identified as the cause of a penetrating smell. The laboratory value for cresol was 1.6 micrograms per cubic meter of indoor air, below the guideline value II. Nevertheless, the building management team, together with the school management, decided to remove the floor covering in order to escape the unpleasant smell. The problem is often hidden in the floor for decades. Only when the top layer is removed due to renovation or refurbishment work, do the chemicals in the room air appear clearly. In the case of the school mentioned above, the screed also had to be removed. The material had absorbed too much of the smell due to secondary contamination.