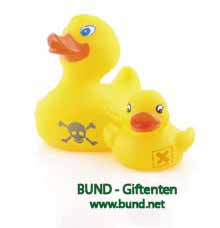 The Confederation of the Earth Germany (BUND) vehemently opposed hormonally active substances in plastic utensils and Cosmetics. In cooperation with other European organizations (NGOs), the German environmental organization wants to influence politics and industry to ban these hormone cocktails. BUND made attention early in 2010 on phthalates as plasticizers in child’s toys and bisphenol A in pacifiers and bottles. Currently the network is considered the attention of hormonally active chemicals in cosmetic products in the broader sense.

The term “EDC” has established itself throughout Europe. Endocrine disrupting chemicals are substances that act like natural hormones in the body. They are brought in connection with health problems that occur widely in recent decades worldwide. These include the decline in sperm quality, certain hormone-related cancers such as breast, prostate and testicular cancer and premature puberty in girls. Particularly at risk are fetuses in the womb, babies and pubescent. For these individuals, the formulation of limits is not helpful. Researches point out that even the smallest quantities of pollutants may act on the endocrine system. In addition, the substances in everyday life occur in combination. In cosmetics are included according to experience various additives, such as Preservatives in shampoos and shower gels or UV filters in sunscreens.

In which products hormonally active substances are included?

The range is so extensive that will be discussed here only to objects in the immediate residential environment. Phtahalate stuck as a plasticizer with a large volume fraction in paddling pools, mud pants, rubber boots or plastic miniatures. They should keep the intrinsically brittle PVC elastic. Bisphenol A (BPA) is a starting material for polycarbonate. It was found in plastic bottles and pacifiers, also in cans, which were coated with BPA-containing epoxy resin. A safe alternative to plastic bottles or cans are containers made of glass.
In cosmetics, parabens have been identified as the most common substance (propyl and butyl paraben). Parabens are used as preservatives. Their effect is both estrogenic and anti-androgenic. The study of BUND lists the products of individual companies with the brand names. In natural cosmetics EDC had not been found. This brings the consumer protection organization to believe that recipes and production processes with alternative substances are possible.

The currently existing limits on parabens in cosmetics are not enough European environmental organizations. The limits take into account, first, not the cumulative effect of various cocktails and secondly not that already can cause disturbances in the endocrine system the smallest amounts in the stages of child development (fetus, infant, puberty). Denmark has banned the first EU country the use of parabens in cosmetic products for children under three years. Otherwise, the use of parabens across the EU permissible as long as the limits are adhered to. Bisphenol-A may no longer be used since 2011 for the production of baby bottles. The environmental groups are calling for a general prohibition of hormonally acting products. This is against the background that the EDC-containing substances can not be clearly identified with the existing test methods.

It pays to go with this complex issue more in depth. Below are some sites:
www.chemtrust.org.uk
www.chemicalshealthmonitor.org