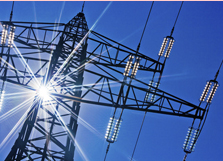 Triggered by the energy transition in 2011 power to be transported from the windy areas of the North Sea to the South of Germany. As a transmission technique is the so-called high-voltage direct current electric power, abbreviated HVDC provided. The poles should be like a hundred meters high and have a voltage of up to 800 kilovolts (kV). So far, the current transmission in Germany is done by alternating current with a maximum voltage of 380 kV.

Why there is a protest against High-voltage power lines

The HVDC technology is described on Wikipedia. In a detailed letter dated 29.10.2012 to the Federal Network Agency, the citizens’ initiative “Citizens under high voltage” from the district of Bayreuth/Germany justifies its rejection of the high voltage direct current transmission via Northern Bavaria. The wiring would cut through the tourist and biologically valuable landscapes of the Franconian Forest and the Fichtelgebirge. Important habitat areas and Natura 2000 (Flora-Fauna-Habitat) would be severely impaired.

The need is questioned

since the network development plan important parameters not considered, e.g.
• tapping future potential of energy savings
• Accelerated expansion of decentralized combined heat and power (CHP)
• Increased development of wind power in Bavaria
• increasing expansion of other distributed energy generation structures in southern Germany
After the network development plan (NDP) 2012, four HVDC corridors of northern to southern Germany are built, including a pilot plant with four gigawatts and a hundred meter high masts across the territory of Upper Franconia.

Likely to have significant emissions of electromagnetic fields

For the use of direct current transmission technology with such high performance of four gigawatts (GW) is likely to have significant emissions. Regarding health relevance of electric and constant magnetic fields of this magnitude so far there is very little experience. Ultimately, even the necessary distance to the nearest building not be determined reasonable. Subsequent revisions are practical impossible due to the gigantic infrastructure.

Storm damage can not be calculated

High voltage overhead lines with the mentioned significant turning point in the landscape are also susceptible to weather hazards such as ice cliff, lightning and fires caused by spontaneous combustion in trees. The influence of weather capers triggered by the climate change should be demonstrated by simulation models.

The citizens’ initiative calls on the Agency to support the energy transition to a decentralized, sustainable and environmentally friendly web development and in particular to be aware of the health risks of the citizens.

The full letter of the citizens’ initiative as a pdf-download in German:
hgue-oberfranken2012.pdf