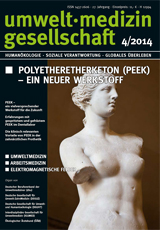 The German journal “Environmental Medicine Society” published in issue 12/2014 a mobile study of a Japanese research team. 107 residents of a skyscraper in Okinawa participated in 2009 in a clinical study in conjunction with a questionnaire. The response rate to the questionnaire was 88%.
Background: In the eight-storey high-rise building was attached in 1998 a mobile antenna in the range of 800 MHz. In March 2008, two additional transmission facilities were put into operation. They were broadcasting in the range of two GHz. The first health examination was carried out in January 2009, i.e. eleven months after the start of broadcasting in the 2-GHz-conditioning and eleven years after the start of the 800-MHz antenna. The second study was conducted in November 2009. At this time, both systems were already five months and nine months no longer in operation.
END_OF_DOCUMENT_TOKEN_TO_BE_REPLACED