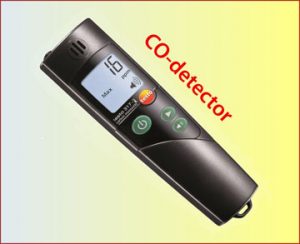 Use high-quality devices to measure CO

The German Medical Journal reports 3,700 cases of poisoning with carbon monoxide (CO) per year, around ten percent of which end in death. Flue gases from poorly burning stoves or gas water heaters are still at the top of the polluter. But also in pellet storage rooms or shisha bars carbon monoxide accumulates in a dangerous concentration. When the urgently needed oxygen supply has to be done, a small electronic device can indicate. However, it is advisable to study the technical data carefully before buying CO detectors. Because the cheaper the device, the longer the response time. With high-quality devices, the response time is less than a minute; with low-cost solutions, it can take up to ten minutes before the warning is given. For users also to note: CO warning detectors must be additionally installed, because the “normal” smoke detector can not fulfill this function.


Carbon monoxide due to incomplete combustion and exhaust gases

Carbon monoxide is mainly produced by incomplete combustion. This is why CO detectors are recommended for all persons working with combustible materials indoors. If you run a wood stove, an open fireplace or a gas boiler, you should also familiarize yourself with ventilation technology and handling the valves. Furthermore, the German Fire Service Association recommends not to overburden the furnace room with fuel Homeowners need to have their chimneys or gas stoves checked regularly. The installation of a CO detector can not cancel this obligation. A serious accident occurred in early 2017 in Arnstein, Bavaria. There, the exhaust gases of a gasoline-powered power generator caused the CO emission in a garden shed. Six teenagers lost their lives back then.

In some German cities, among others in Frankfurt/Main, Wiesbaden, Cologne and Rosenheim, the law enforcement agencies and the police authorities control restaurants in which hookah pipes are smoked. As the Spiegel (German newsmagazin) reported in 2014, an 18-year-old suddenly collapsed unconscious after smoking the hookah in a bar. The concentration of carbon monoxide (CO) in the patient’s arterial blood was 25.7 percent, well above a normal figure of maximum five percent. In Rosenheim (South Germany) the police measured 170 ppm CO in a control in two bars in the air. The workplace policy provides for a limit of 30 ppm for an 8-hour day.

For restaurants missing statutory requirements for the prevention of carbon monoxide

The police and municipalities can only urge the restaurants to install ventilation systems in the rooms and install CO alarms. The authorities do not have a legal basis. According to the non-smoker protection law, the rooms in which the pipe is smoked may not exceed 75 square meters. For young people under 18 years of stay is prohibited. However, the installation of a ventilation system should be in the interest of every restaurant operator. If there are illnesses or even deaths due to tobacco smoke in rooms, claims for damages can not be ruled out.

In carbon monoxide poisoning, the CO molecules dock to the red blood pigment (hemaglobin). As a result, oxygen molecules in the blood are gradually displaced by hemoglobin. Toxic symptoms include tiredness, drowsiness, nausea, dizziness, headache and flu-like symptoms. In severe cases, unconsciousness and death occurs. As a first aid measure the person concerned must be brought outside. High levels of oxygen are delivered to the patient in the hospital. Some clinics have pressure chambers using Hyperbaric Oxygen Therapy (HBO). It is administered with the help of positive pressure 100 percent oxygen to displace the carbon monoxide from the red blood dye. In the worst case, the HBO method takes too long. Researchers are therefore working on an infusion solution that can reduce the CO fraction in the blood even faster. In the laboratory experiment, mice were thus saved from suffocation.