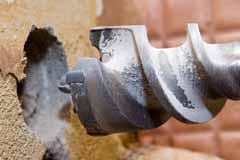 Hole in the wall, which is freshly drilled

The building-biologist Oliver Zenkel looks surprised at the holes in the wall, which are freshly drilled a few centimeters above the base of the sock. Together with Susanne Planer he stands in the living room of the customer. She had called the expert, because there was mold in several places in the wall corners. Mr. Zenkel should carry out a collection of air germs and then have the culture media examined in the laboratory. In the course of the sampling the customer told how the holes in the wall had come. “Over a thousand dollars would have cost this action,” says Mrs. Planer.


A restoration company for damp damage was at work

Before the residents switched on the building biologists, they had commissioned a refurbishment company for damp damage to examine the wall and offer a solution. An employee of the company arrived a week after the phone call and examined the wall. Mrs. Planer was told that parts of the wall were damp and had to be renovated. The problem solution was readily available: a chemical fluid was injected into five wells.

The control measurement could not detect rising moisture

Mr. Zenkel thoroughly examined the inside wall with his electronic moisture meter and came to the conclusion that there was no rising moisture in the wall. The relatively small mold had different causes: an interior insulation was improperly attached to the natural sandstone masonry. In addition, a thick wallpaper over the gypsum board ensured that the penetrated water vapor could not dry out. The building biologist suggested replacing the wallpaper, replacing the defective interior insulation with a suitable material and then painting the surface with a lime paint. In this case, the wall injection did not prove to be the right method.

Renovation companies like to lure in their advertisements with the offer to carry out a free inventory of molds. This is the risk for the customer. The local consultant is very interested in the lucrative assignment. The idea is that the moisture measurement shows results that lie in the sense of the renovation company. Mrs. Planer also confirmed this process: “The installer came to the apartment, made some measurements and then told the customer that something had to be done …”. A few days later the offer lay on the table. After the customer had given the order, the drilling was made shortly thereafter, followed by the wall injection.

The measurement protocols should be available in written form

The customer must insist that the measurements are documented. Otherwise the order must be rejected. The following should be stated on the protocol: where was measured, which method was applied and how high is the degree of penetration of the wall. A control measure after the completion of the restoration provides the basis for whether the proposed method successfully solved the mold problem of the customer. In addition to the actual measurement, the object-related boundary conditions must also be noted, e.g. Type of building construction, regular cross-section and homogeneity of the building material. It is obvious that this important stocktaking can not take place in a few minutes.